Spiders at our backyard..

I was invited by the 'Most Naked Hermit Crab' for a walk at Kranji Trail/Sungei Buloh Nature Reserve on morning of 15 December 2007. There were 7 of us present for the walk which started from Kranji Reservoir.
During the walk, whenever someone spotted something interesting, everyone would bring up their cameras, snapping pictures of the creatures (the following picture from left: JL, JH, SY, RY). 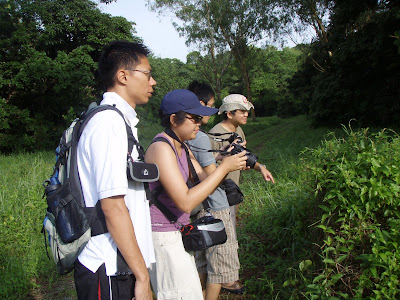 However, my focus was on spiders, which belongs to the Subphylum Chelicerata under the Phylum Arthropoda. Horseshoe crabs, the only surviving merostomes, are also classified under the same subphylum, which accounts for the well-said phrase- 'Horseshoe crab is more related to spiders than crabs'. Marine creatures such as lobsters, crabs and shrimp shares the same phylum as spiders althougth they belong to the Subphylum Crustacea.
Hence, my quest was to look out for spider and webs throughout the walk.
My first observations was on the different types of webs they build. I noticed that some spiders build orb-shaped webs, while some build tent-shaped webs(picture unavailable) and some don't build webs at all. 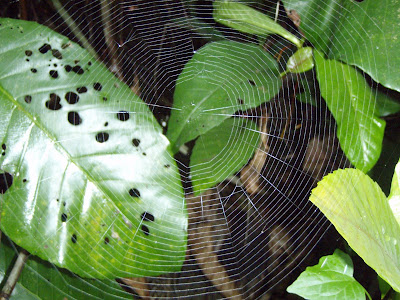 One example of a non-web builder is the 'crab spider' which ambushes preys instead of trapping them, which we commonly know. However, they are not active hunters. Instead, they camouflage among flowers with their body coloration in wait for unsuspecting preys before graping them with their front appendages. As the name suggests, these spiders are recognised by their resemblence to crabs with their 1st 2 pairs of legs held in a wide position resembling the claw-appendages of crabs. 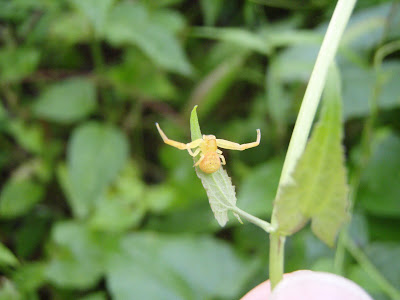 Another active hunter found was the Fighting Spider (Thiania bhamoensis). It has the ability to jump around with its muscular legs. However, these spiders do builds tent-shaped webs for protection purposes, such as storing their eggs, instead of prey trapping. While we were taking pictures of it, the spiders was 'jumping from one camera to another- RY' because of its curious nature. 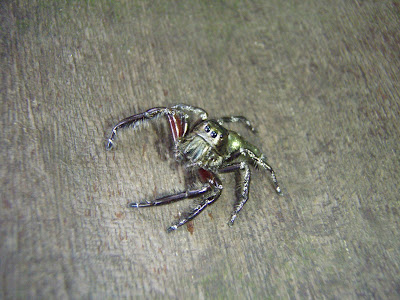 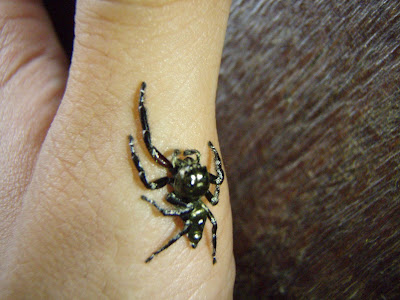 As for prey-trapping spiders, I had the privilage of observing a live action of a orb-web spider (Brown sailor spider, Neoscona nautica) trapping its prey. As I was taking picture of the spider, it suddenly scurried to the lower region of web where a small struggling insect was trapped. The spider was observed what seemed like wrapping the prey with silk (other processes may happen as well, though not observed). In less than a minute, the prey was fully wrapped and became completely motionless before the spider moved back to its orginal position on the web. 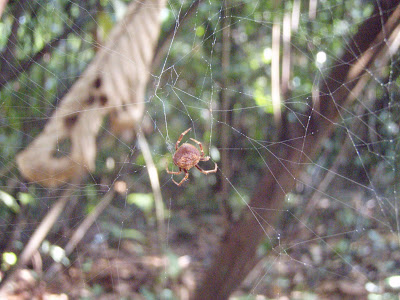 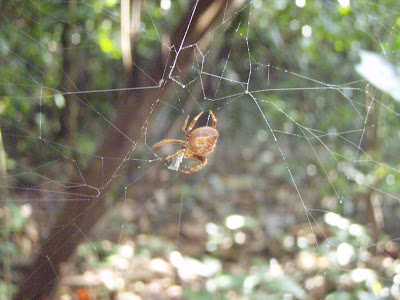 On top of that, we spotted a few other species of orb-web spiders, mainly the Oval St Andrew's Cross Spider (Argiope aemula) and Hasselt's Spiny Spider (Gasteracantha hasseltii). 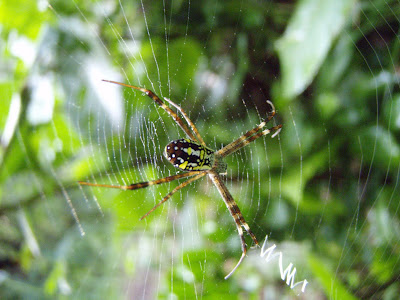 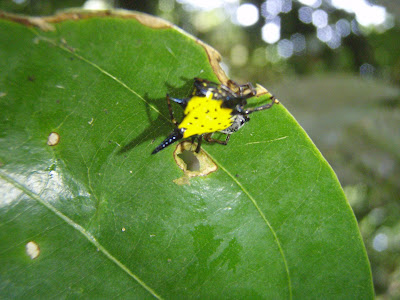 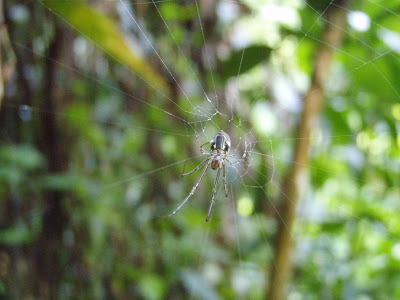 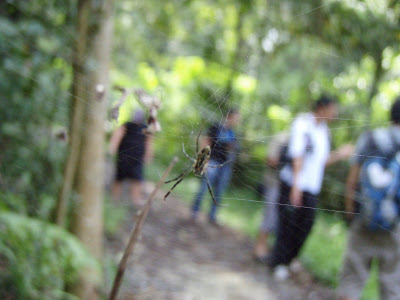 Also, in the mangrove area, we saw this spider with a huge white sac beneath its body, probably a egg sac. As suggested by SY 's friend, it might be a huntsman spider (family Sparassidae). 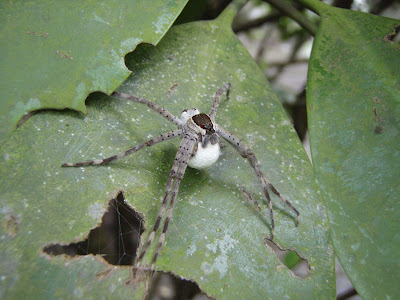 As spiders have hard exoskeletons, in order for their size to increase, moulting must occur, just like crustaceans. Along the Kranji Trail, I managed to spot one of the shedded exoskeleton of an unknown species of spider. 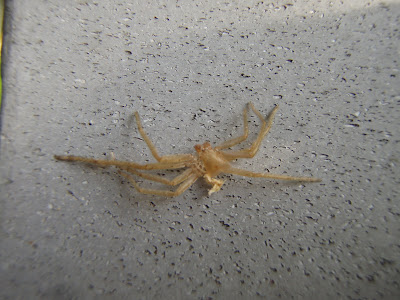 We were fortunate the rain came only after the walk. All in all, although tired, each of us managed to bring back many photo memories of the pieces of nature in Singapore. And for me, specifically the relatives of crustaceans..... 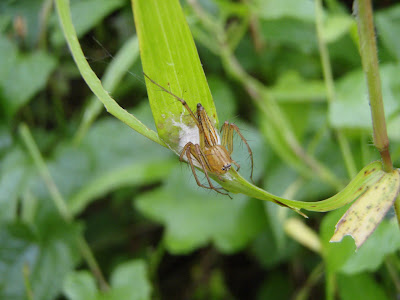 Arthropod (ar'throh-pod): An invertebrate that belongs to phylum Arthropoda: characterized by a hard exoskeleton; a segmented body; and paired, jointed appendages.

Exoskeleton (ex" oh-skel'eh-ton): An external skeleton, such as the shell of mollusks or outer covering of arthropods; provides protection and sites of attachment for muscles.

Initially planned an entry covering on Pasir Ris Mangrove on 'Playing Death.. to stay alive' before this. However, regretfully, the pictures were all accidently deleted from my computer, hence abandoning that entry.

alamak, u shld use RY instead of TC lah... now people are going to think that my first name is tide, and family name chaser, and that's why it's TC... Wahahaha

btw, a very nice and interesting entry. obviously u've spent some time doing some research, unlike the lazy me... :P

guess that's the diff betw a bio student and a layman :)

Thanks Mr Chaser, I mean Mr Y for your compliment..

I have edited your name accordingly..

Hmmm... But Tide Chaser sounds like a super cool name to have! :)

Hey Justin, the photography is excellent! What kind of camera do you use ah?

I've always wished I could do shots like that.

Oh by the way, since the worm sounds so ambiguous. I am Shuyi.

the picture you took is not of the normal fighting spiders most people know...but it is another type of jumping spider