Is the Labrador talk really that cheap? 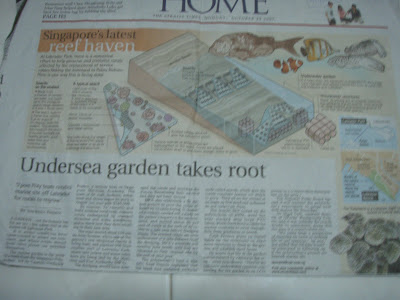 The newspaper article, Undersea garden takes root (ST, 29th Oct 2007) revealed to some groups of nature lovers that that the debris which they spotted scattering around on the beaches of Labrador nature reserve since last year. As such they began to voice their concerns through the Internet and subsequently were approached by Straits Times on November 26th.

After reading some of the entries, I decided to avail myself as a volunteer for monitoring the corals on their SEACILs so as to know more about project, and hoping to find the out the truth in the current situation. This was suggested by one of the Labrador Nparks officer. As such I attended the briefing a few Saturdays ago by Capt Frederick Francis, the project leader of SEACILs.

In a nutshell, the briefing touched on the following issues. .

First, he introduced himself as being a senior lecturer at Singapore poly and also does a lot of UN work as legal consultant for IMO. As such, he said that ‘environmental research is by opportunity’ as he is not a researcher.

Also his core team comprises of 3 members, that they were all strictly volunteers who are not paid for the project. Other volunteers helped only whenever it is required. As one of the 3 is ‘offshore diving superintendent’, he travels around often, leaving the other 2 running most of the show.

During the briefing, he also made mention that he is working with the Nparks and MPA on this project because the area is their ‘territory’. Apart from that, the project is independent under the umbrella of SP although experts were also consulted once in awhile.

With regard to the structures, the SEACILs were created on the beach (picture seen in the lab showed that it was the inter-tidal area) during low water (tide). They were transferred to the sea during high waters. PVC pipes were used as ‘sea curtains’ reducing the amount of sediments reaching the transplanted corals. This method, he said, used less money than the conventional methods. 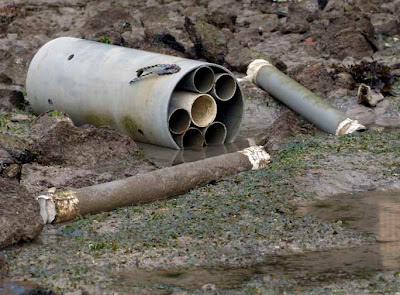 He said the materials used for the project was in compliance with the 1999 OSPA (Oil Spill Prevention Act?), which are mainly seawater, beach sand and cement. These materials, he said, are not just biodegradable, but was good for the environment.

To help us understand the project better, we were brought to the on-site laboratory which consisted of a container within a small fenced up compound. There, we were shown a down-sized replica of the SEACILs in a tank as well as picture posters taken in the course of the project, one of which was pertaining to the concerns raised by the other wildlife blogs.

Earlier during the briefing, Capt explained that if they are destroying things, why (they) come down, why they spend their time, which he rather spend his time outside with his family. (paraphrased from his quote). Also, he said that he is worried only about what he was “only worried about what (he) is doing”, and choosing to ignore the ‘protesters’.

However, according to ‘the(new)mediaslut e-zine’ website touching on this issue, “ignoring email complaints is a very risky thing to do in the field of communications these days.” Hence, “without a proper explanations on questions, these email senders will craft their own conclusion which may be misguided or just based on hearsay.” Thus, accountability is an essential aspect of any project, especially in this days of mass-media coupled with free speeches. 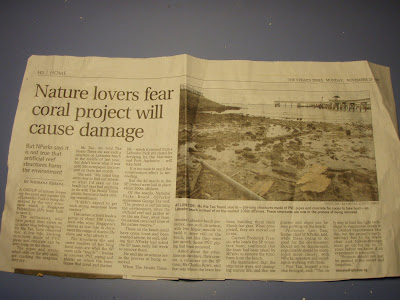 With regard to the issue of destroying things, the issue was not so much in the actual SEACILs itself. After all, it is an experiment and success or failure is merely part the learning experience for the team. Genuine ‘protesters’, who spent precious time voicing their concerns and taking pictures of the debris, would not have poked their nose into such results, unless the project have somehow, consciously or sub-consciously, affected their area of concern, in this case the marine environment. 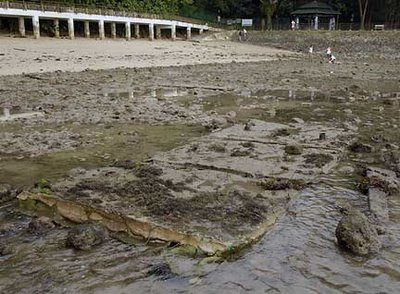 Hence the issue here is that of the debris left behind which can be seen 'literally from the beach and jetty... at low tide'. Coincidentally, these debris were found on the Nature Reserve itself, where no foreign structures is allowed to be placed in the first place, much less large concrete slabs. According to one reply to this issue at tomorrow.sg, ‘building an artificial reef should not be an excuse for dumping rubbish onto any of our shores.’ All that the nature lovers want is that the team does not destroy their patch of nature in an attempt to do their bits for the environment as well.

In addition, the intertidals of Singapore is alive and not dead. As such, it is particularly important to groups such as students and other nature lovers who don't dive. Recently, the wildfilms featured an article about the importance of seashores to students.

Therefore, immediate remedial actions should be taken, taking into consideration the entire aspects of our nature. These will greatly enhance the effort of everyone in doing their parts for the environment –those who appreciate the rocky shores and living intertidal habitats such as seagrasses, and lower reef flats while the project team successfully researched a new-generation artificial reef in the subtidal area for the betterment of our future. 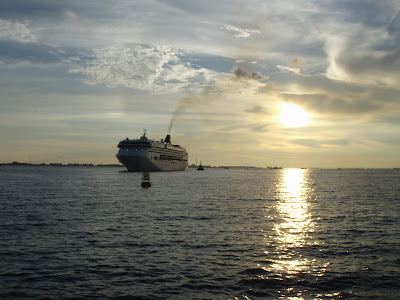 The group, which comprises of volunteers, has been documenting the intertidal on all parts of Singapore. Their intention is to convince Singaporeans that we have living shores that are worthy of protecting not only through mindful development, but also by awareness that activities such as collection, driftnets, littering can damage and even kill our shores. As such, they have raised other environmental issues such as:

Apart from that, the group has also worked with scientists in learning more about Singapore shores. Some scientists includes Dr Daphne Fautin (world anemone expert) and Dr Dan Rittschoff (from the US). On top of that, they were also involved in the Chek Jawa Recovery Project and the study of dog-faced watersnakes in Singapore.

Members of the group also volunteer as guides on many of the nature walks offered to the public.